Dad dances all night at daughter’s wedding after spine surgery 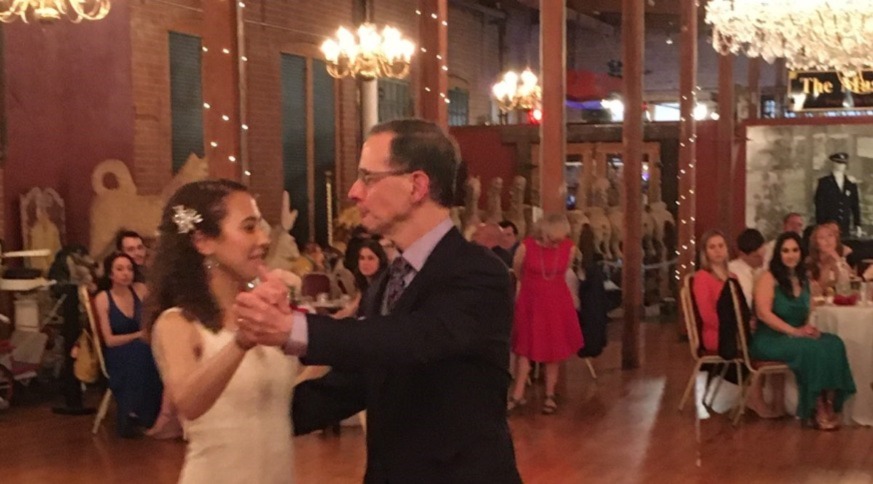 William Green, 64, had terrible pain from his lower back shooting down his left leg. It was affecting his mobility, which was particularly difficult for him because he has a consistent workout routine and travels often for work. He also worried about being able to enjoy his daughter’s wedding reception.

Sudden lower back pain and sciatica

William started having pain in his lower back in early September 2021. Nothing in particular caused the pain.

“One day, I stood up and my back hurt. Then, it hurt a bit more the next day,” said William.

“While it can be frustrating not knowing the exact cause, it is common for this type of back pain to come out of nowhere,” explained Dr. Scott Sanderson, chief of neurosurgery at Danbury Hospital, part of Nuvance Health.

William’s back pain continued to worsen.

“Mid-way through September, I was in excruciating pain. I could barely walk,” said William.

William was experiencing sciatica — acute nerve pain radiating from his lower back down his left leg.

He also started experiencing drop foot and difficulty walking from weakness in his left ankle.

Before the back injury, William unfailingly started every day at 6am with a workout.

“I was pretty active, and suddenly stopped everything because of the back injury. I liked to ride my bicycle, work out on an elliptical and run,” said William.

“My physical wellness and overall well-being are also important for my work because I need to carry suit cases, navigate through airports and travel on planes,” said William who works in business software solving customers’ supply chain problems.

William first visited his longtime primary care doctor, Dr. David Weinshel. William had an MRI scan, which showed a ruptured disc that was compressing the nerves at L4 and L5 vertebrae in the lumbar spine.

Spinal discs are between each vertebra in the spine. They are rubbery on the outside with a jellylike inside. A ruptured disc — also called a herniated, bulging or slipped disc — happens when a disc is compressed (squished) and presses on the spinal cord and nerves.

Related article: How do I know if my back or neck pain is serious?

Conservative treatments for a ruptured disc

William tried conservative remedies first, which is standard of care for a ruptured disc.

William took anti-inflammatory medications (NSAIDs) and applied heat and ice to his lower back. He also saw a pain management specialist and tried cortisone injections and oral steroids.

“The pain management therapies helped, but then I plateaued by February,” said William. “I still had back and leg pain and foot weakness.”

William also had swelling in his left foot, which is an unusual symptom of a back injury.

William especially wanted to feel better for his daughter’s wedding reception in April 2022. His daughter got married in 2020 and just had a small ceremony because of the COVID-19 pandemic.

“My daughter was finally going to have a wedding reception with family and friends. I had been looking forward to it and wanted to feel better by then,” said William.

Related article: Do these five things before your first visit with a neurosurgeon for spine pain

William decided to have a spine surgery consultation. He visited neurosurgeon Dr. Sanderson in March 2022.

“The ruptured disc was causing nerve damage and weakness in William’s left leg and ankle. We first discussed alternatives to surgery. But since he had already tried conservative treatments over several months, I recommended he have spine surgery sooner rather than later to regain functionality and mobility,” said Dr. Sanderson.

Neurosurgeons have intricate knowledge of neurology and how the nervous system is put together. Dr. Sanderson identified that William had two compressed nerves and determined both needed to be freed up to relieve his pain.

“I decided to have surgery in March because Dr. Sanderson was confident I would be dancing at my daughter’s wedding reception, which was less than five weeks away,” said William.

William had surgery at Danbury Hospital on March 23.

Dr. Sanderson performed a laminectomy and discectomy. Using minimally invasive techniques, he performed the procedure through small incisions versus an open surgery.

During the laminectomy, Dr. Sanderson removed the back part of the bone that covers the spinal canal (lamina) to make space and decompress the spinal cord and bundle of nerves.

Then, during the discectomy, Dr. Sanderson removed pieces of the herniated disc to relieve pressure on the nerves.

Dr. Sanderson administered a local anesthetic in Williams back during the surgery, which helped alleviate his post-operative pain.

“The sciatica pain felt better right after surgery,” said William. “I was able to walk the hallways of the hospital unit and even did a step test with no problems.”

William stayed in the hospital one night after surgery. He took one week off from work and then started working from his home office. He made sure he did not sit for more than 30-minutes at a time and used a standing desk.

Related article: What type of spine surgery is right for me?

At home, William did ankle strengthening exercises and walked every day.

William said, “I did not miss anything during my daughter’s wedding reception. I was able to entertain family and guests before and after it, including nearly winning a hotly contested round of mini golf. At the reception, I danced all night with no problems.”

Related article: What can I expect after spine surgery?

Today, William said he does not have pain, and the weakness in his ankle and foot and swelling are improving every day.

William is back to his 6am workouts. Before the back injury, part of his exercise routine was jogging up a big hill.

“I am back to slowly jogging about two miles and can make it up the hill,” said William.

“I am pretty happy with my activity level. I significantly gained back what I lost,” said William. “I am working towards getting even stronger.”

William was grateful that all the care he needed was within a 20-minute drive from his home in Newtown, Connecticut.

“Driving in a car was painful. At times, I needed to sit in the back seat of the car while my wife drove because it was more comfortable,” said William. “I did not have to worry about the hassle of traveling far and my support system was nearby.”

“I also did not have to disrupt my schedule much despite seeing different doctors and having many tests and treatments over several months,” said William. “Everyone I saw was thorough, gave me alternatives for treatments and had expertise,” said William.

Learn more about back and spine surgery and find a neurosurgeon at the Nuvance Health Neuroscience Institute.

Dr. Scott Sanderson is a board-certified, fellowship-trained neurosurgeon. He specializes in the surgical treatment of brain tumors and trauma, and degenerative and traumatic spine diseases. Book an appointment directly online with Dr. Sanderson.


Disclaimer: Spine surgery outcomes vary from person to person. No individual results should be seen as typical.