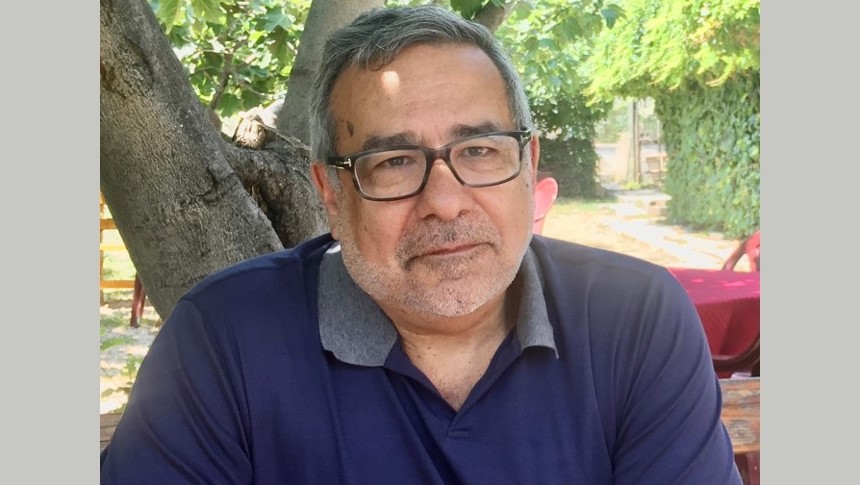 David Doty thought cancer was in his past. But 20 years after he had aggressive but effective chemotherapy to treat advanced Hodgkin’s lymphoma, he was diagnosed with two different, new cancers on the same day, May 27, 2020. Both likely resulted from the original chemotherapy treatments which had bought him those intervening and additional 20 years.

David, a 60-plus-year-old New Yorker, had pain around his rib cage that felt like soreness from coughing too hard. He had a CT scan after the pain persisted. The scan showed no breaks or bruises as he thought it might, but unrelated to the original concern, it showed a growth that looked like cancer in his right lung.

David needed to have a biopsy to confirm if the growth was cancer. But in March 2020, the COVID-19 pandemic had just hit the United States and New York City was shutting down. He did not know when or if he could be treated, and he had real fears about exposing himself with potentially lung cancer to medical environments.

“It was difficult to know that I might have cancer, but not definitely know when I would be receiving a diagnosis,” said David, who runs his own consulting and advisory company with clients in the digital and advertising industries. He is also a writer with a regular column on Forbes.com.

During this time, David had a second CT scan to capture a broader view of his lungs. The scan also showed a growth on his thyroid, which he would also have biopsied.

“The city’s medical focus was rightfully on emergency cases of immediately life-threatening COVID-19 so I was aware I would have to wait,” said David.

David confided in a friend about his health concerns, and she helped by informing her friend, Dr. Susan K. Boolbol.

Dr. Boolbol is the chief of breast surgical oncology and breast program at Nuvance Health.

“Dr. Boolbol said she would help me maneuver my way through these medical, diagnosis and treatment issues and introduce me, as she did, to leading practitioners I would need to survive,” said David.

Dr. Boolbol, who was chief of breast surgery at Mount Sinai Beth Israel before coming to Nuvance Health, connected David with specialists in New York City.


“I had confidence in my physicians and treatment plan and the will to fight and live when I had Hodgkin’s lymphoma. I decided to muster that same conviction this time around,” said David. “I had faith in Dr. Boolbol’s competence and confidence and that I was going to survive whatever was to come.” 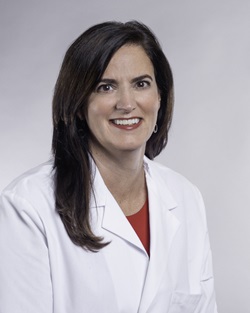 David got his two different cancer diagnoses on the same day. The results of each biopsy revealed he had lung cancer and a papillary carcinoma, a type of thyroid cancer.

Anne Lacombe, David’s friend since their first year of college, made all the arrangements to pick him up in a rental car at his apartment in Manhattan and drive him Dr. Bhora’s office in Danbury, Connecticut.

“It was a calming, lovely drive especially after not leaving our apartments for so long because of the pandemic,” said David. 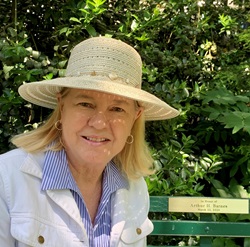 After meeting with Dr. Bhora, who is the system chief of thoracic surgery and thoracic oncology program for Nuvance Health, David said, “I felt like the team knew what they were doing, cared about me and wanted me to survive.” 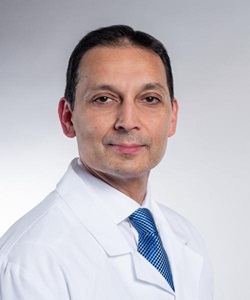 First, Dr. Bhora used imaging to locate the cancer in David’s lung and place a fiducial marker. During the operation, Dr. Bhora removed the marked piece of cancerous lung, with the aim to preserve as much healthy tissue as possible.

A robotic lung resection is a minimally invasive technique where Dr. Bhora can remove a piece of the lung with no more than a 1.5- to 2-inch incision.

Patients usually have a fast recovery and good outcome after a robotic lung resection especially if the cancer is an early stage.

“There was someone by my side as soon as I came out of surgery. Then I was in a very nice room for one night before I was able to go home,” said David. “The nurses were spectacular. I felt like they cared for me with their minds and souls.”

David did not need additional treatment because Dr. Bhora had removed the lung cancer completely.

Related article: What you need to know about lung cancer screenings and reducing risk

Back in Manhattan, David said he had a “remarkable” recovery and was able to start walking soon after surgery.

“Dr. Bhora’s surgical ability is second-to-none. How concerned, kind and personable he is impressed me, too,” said David. “Funnily, I later noticed there was a plaque for Dr. Bhora in my oncologist’s office in New York City. He is respected and deservedly so.”

“Today, one of the most difficult stories I have to tell myself is that I survived three cancers because I feel like a healthy person, do not have any physical reminders and have no constraints,” said David.

Regarding survivorship, David said, “I eat healthy, exercise, walk about two miles every day and keep my friends and those who love me nearby.”

David fondly shared, “When my friends found out about my cancers, they started video calls with me on Thursdays and Saturdays. After I got out of the lung cancer surgery, my Thursday group greeted me on the call wearing the same t-shirt that said, ‘Too Mean to Die.’ I loved it! And my Saturday friends took me out for something I had desperately missed: A good, crisp, cold Champagne. Another friend drove me to do my grocery shopping. That is how you survive; friends make it happen after physicians like Dr. Bhora make it possible.”

In addition to his support system, David said, “I feel lucky to have had top tier medical specialists in my corner. Having competence, confidence and faith in my physicians helped me survive.” 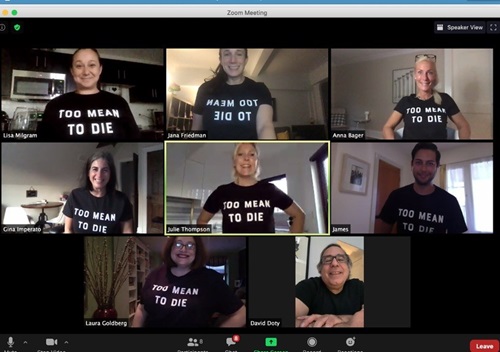