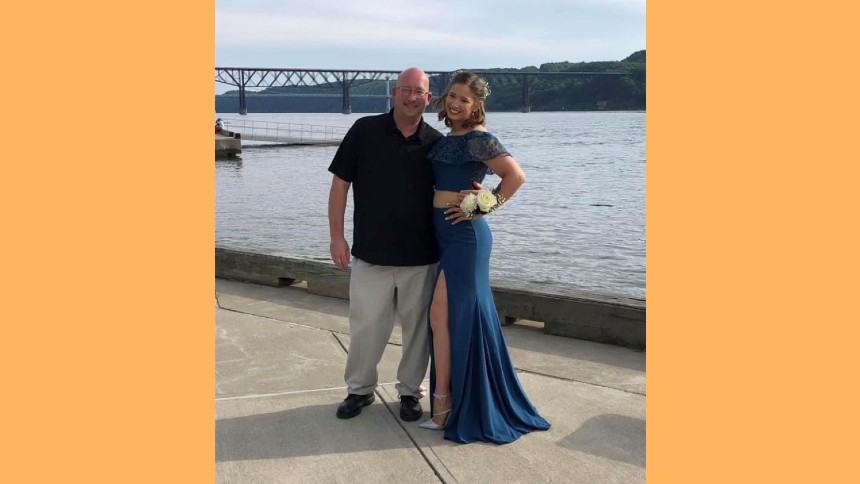 There is no good age to have a heart attack, but at 45, without a history of cardiac disease, Mike Brown said it was shocking to have suffered one.

“Everyone needs to know that just because you’re younger doesn’t mean you shouldn’t get checked out,” said Brown, of Poughkeepsie. “I believe a story like mine will swing a lot of people to get looked at.”

Earlier this year, Brown was home lying on his couch when he felt some chest pain, he recounted. At first, he thought he had pulled a muscle from coughing too hard, but when he started to feel numbness in his arm, Brown immediately called 911.

While in the ambulance on his way to Vassar Brothers Medical Center, Brown said he “literally died.” He was revived by paramedics in the ambulance, he said, and then again in the Emergency Department. Brown was then sent for surgery with Dr. Rajeev Narayan, an interventional cardiologist with Nuvance Health, and required two stents for his blocked arteries, he said.

“I went from the ER to the OR to the ICU within three hours of my heart attack, and I walked out of Vassar on my own power 36 hours later,” Brown said. “I had phenomenal care. If it wasn’t for the staff, I wouldn’t be here today.”

Dr. Narayan emphasized that heart attacks “can happen to anyone.”

“There are certain things that put you at higher risk, it is always important to be aware of possible symptoms like chest pain, shortness of breath or exertional intolerance for which one should seek emergency care,” he said.

Brown, a medical assistant in ophthalmology and father of three, said he has a new outlook on life that includes sharing his story to potentially save lives.

“Go to a cardiologist and get your heart checked even if you don’t have a history of heart disease. It’s so important,” he said. “The doctor told me that only 5 percent of people who had what I had make it, so I am appreciating every moment of life. Not a lot of people can do that.”

*** This story is one patient’s experience, recounted here for educational and general informational purposes only