Woman has rare cancer found by chance and removed robotically 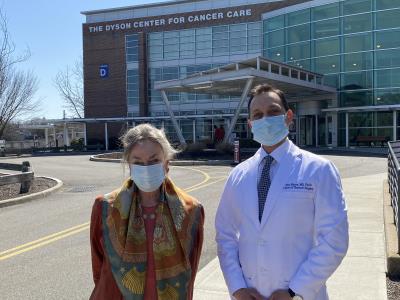 Marianne Thorsén could have expected a worrisome finding from the biopsies and screenings she has had from being high risk for breast cancer — especially because two of her three sisters had the disease. She never expected a routine MRI of her breasts to show a tumor in her chest that turned out to be a thymoma — a rare type of cancer.

Marianne — a 76-year old, Sweden-born New Yorker — was shocked by the diagnosis.

“I had never heard of a thymoma so to have one was a major surprise,” said Marianne, who now lives in Germantown, New York.

Marianne’s primary care doctor said she should address the thymoma straightaway. She coordinated care for Marianne with Dr. Faiz Bhora, chief of thoracic surgery and thoracic oncology at Nuvance Health.

Despite being a surgeon’s daughter and having a close friend who is a cancer scientist, any feelings I had to consult with another physician dissolved after I reviewed Dr. Bhora’s qualifications,” said Marianne. “I felt even more confident after I met him.”

Dr. Bhora is a nationally recognized thoracic surgeon who specializes in minimally invasive procedures to treat thoracic diseases and airway conditions such as lung cancer and tracheal stenosis.

Dr. Bhora recommended Marianne have a robotic thymectomy — which is performed through a few small incisions — rather than an open surgery that would require splitting her breastbone to access the thymoma in the middle of her chest and then wiring it back together.

Surgeons at Nuvance Health usually use the robotic platform and keyhole approach to operate on the thymus because it results in a faster recovery for patients, typically with a one- to two-day hospital stay.

“Even though I have had my fair share of surgeries, I was a little worried about having surgery to remove the thymoma because Dr. Bhora said the tumor was pressing on my aorta,” said Marianne. “However, Dr. Bhora, who is very personable, explained everything clearly and I felt confident about the surgery.”

Marianne’s surgery was in July 2020. She said having surgery during the COVID-19 pandemic did not “affect me whatsoever or make me hesitant to proceed” because Vassar Brothers Medical Center (VBMC) “took every precaution.” She had a COVID-19 test before surgery and would have a private room after surgery. “They took great care of me,” said Marianne.

Marianne arrived at VBMC at 6 a.m. for surgery.

“Everyone was calm, nice, pleasant and professional — there was no theater about it,” said Marianne. “Dr. Bhora came to see me before surgery and I knew I was in great hands.”

After her successful robotic surgery, Marianne stayed in the hospital two nights and then with friends two nights per Dr. Bhora’s instructions.

“I had minor discomfort but no pain after surgery; I never even took an aspirin,” said Marianne.

Marianne was home four days after surgery and started walking Tuss, her six-year old Miniature Dachshund, up and down the road outside their house.

Six days later — and to Tuss’s delight — Marianne was back to walking three miles each morning and evening.

Six weeks after surgery, Marianne said, “I was back to my normal life doing anything and everything, including swinging a golf club without pain.”

“Marianne had a fantastic recovery,” said Dr. Bhora, who is also the associate program director of the general surgery residency program at Nuvance Health. “She did not require additional treatment because we caught the thymoma early and were able to completely remove the tumor.”

Today, Marianne is busy completing her latest kitchen renovation and said, “There is always work to do on the house” including tending to the garden she said she “developed from nothing but weeds.” Marianne said restoring her house “is a lot of fun.” Multiple publications including the New York Times have featured Marianne and her house, which was originally a schoolhouse built in 1710 and converted to a farmhouse in 1750.

Marianne said she “feels lucky” the MRI of her breasts identified the thymoma, and she went under Dr. Bhora’s care.

“It is unlikely the thymoma would have been discovered until it was more advanced if not for my history of being at risk for breast cancer,” said Marianne.

Marianne continued, “I lived in Manhattan for more than 40 years and have had access to the very best surgeons. I had no doubts about Dr. Bhora. I am grateful I was able to have surgery with him close to my home in the Hudson Valley.”

The thoracic surgeons at Nuvance Health are pioneers in the robotic technique, with the first thymectomy ever performed by Dr. Cliff Connery at Vassar Brothers Medical Center. Learn more about thoracic tumor and cancer care at Nuvance Health.

Disclaimer: The outcome of treatment for cancer varies from person to person. No individual results should be seen as typical.