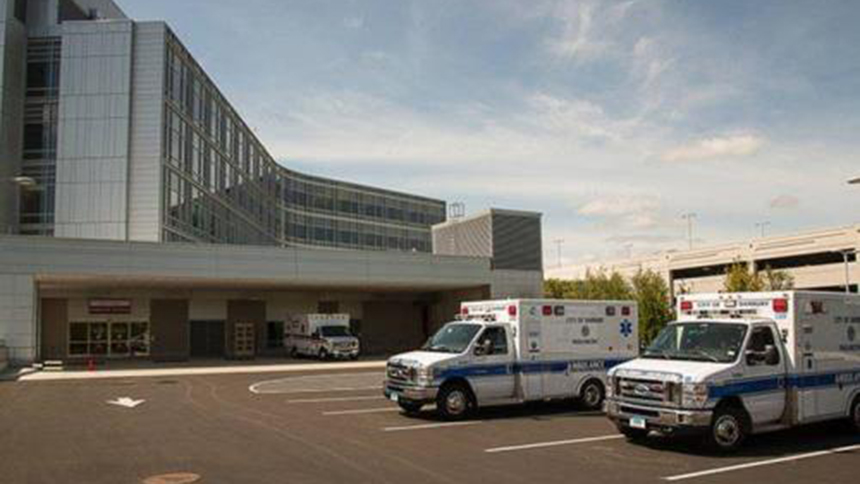 The list of things scarier than a pandemic caused by an unknown virus is short. For Claire and Mark, on that list is their two-year-old son undergoing emergency surgery for a traumatic brain injury during the height of the COVID-19 pandemic.

On May 9, 2020, COVID-19 cases were surging and Connecticut was in lockdown. Claire, Mark and their son Nate spent that Saturday morning drawing, playing music and watering plants.

Around 11:30 a.m., they were in the basement exercising and playing around when Nate accidently bumped into Mark with such momentum he fell down and hit his head on the concrete floor.

“We were totally surprised,” said Claire. “Nate cried at first and we calmed and soothed him. He stopped crying right away and said he felt better.”

Claire and Mark thoroughly examined Nate who had a bump on his head but no signs of a serious head injury, such as bleeding, loss of consciousness, dizziness or vomiting.

He seemed fine. In fact, he said he was hungry so we went upstairs to get something to eat while we continued to monitor him,” said Claire.

About one and a half hours later, Mark and Nate went to play the drums, a favorite activity and talent they share. That is when Nate started behaving unusually.

“We have a playlist, but Nate wanted to play a song that was not on the list and not played on the drums anyway,” said Mark. “Nate cried because we could not play the song and then he asked to be carried to bed, even though it was not his normal naptime.”

Claire stayed with Nate after putting him to bed. He dozed off but was noticeably uncomfortable, restless and sweating.

Claire and Mark wrestled with what to do; as their concern about Nate grew, they also worried about going to the hospital because of COVID-19.

Their concern escalated to alarm when Nate woke up, vomited, screamed and passed out.
Nate was unconscious, his breathing was labored and his body was getting limper and limper,” said Mark. “We called 9-1-1 and an ambulance quickly arrived.”

Claire rode in the ambulance with Nate who remained unconscious.

They swiftly arrived at the Danbury Hospital Emergency Department (ED),where Claire said many people immediately surrounded them to take care of Nate.

The emergency medicine team intubated Nate to help him breathe and got a CT scan of his head.

The CT scan revealed that Nate had a skull fracture and epidural hematoma the size of a tennis-ball on the right side of his head. The broken bone and blood were pushing into his brain. 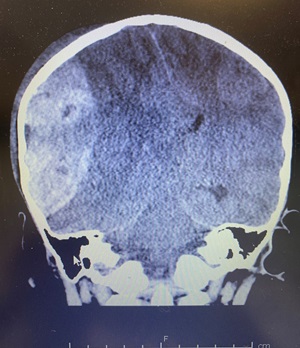 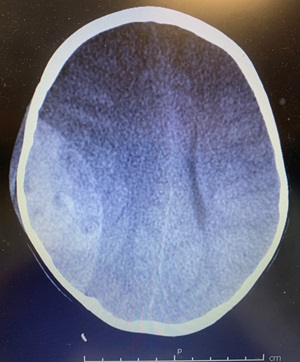 “Seemingly within minutes, Dr. Sanderson appeared. He said to me and Claire, ‘Mom, dad, we need to get going right now,’ and then all of a sudden Nate was in surgery,” said Mark.

“As Dr. Sanderson was walking away, I said, ‘Do not let him die’. Dr. Sanderson said he could not promise that but that is why he was there,” said Claire.

Visitation was restricted as a COVID-19 safety precaution, but exceptions applied for extenuating circumstances and pediatric patients. Claire and Mark stayed in the hospital during Nate’s two-and-a-half-hour surgery.

Dr. Sanderson removed a portion of the broken bone and stopped the bleeding that was squishing Nate’s brain. He then put the pieces of Nate’s skull back together with little plates and screws.

“We were relieved when Dr. Sanderson said the surgery could not have gone better and Nate should be all right,” said Mark.

The day after surgery, Mark said Nate was alert and talking. At home about a week after the fall, Nate was eating normally, drawing, recalling memories and singing.

Nate experienced behavioral challenges such as irritability, which are common after suffering a traumatic brain injury. Mark said Nate improved about six months after surgery.

At such a young age, Nate’s body did not have muscle memory so just five days in a hospital bed affected his ability to walk. Further, his physical activity was limited for eight weeks as he healed from surgery. Nate started occupational therapy (OT) and Mark said he “rebounded quickly”.

Nearly a year later Nate, now three-years old, is thriving. He is learning Spanish and already speaks Portuguese. He is back to playing the drums and making jokes.

Claire and Mark said the toddler is attuned to how others feel and concerned about their well-being, which they think may be attributed to experiencing a traumatic injury and recovering in the hospital. He particularly takes cares of his younger sister.

“Nate’s neurologists post-surgery said he was a ‘miracle’ and he would not have been saved if he had been transferred,” said Claire.

“Despite obstacles from the pandemic, Danbury Hospital’s emergency medicine and surgical teams and Dr. Sanderson were flexible and exercised latitude,” said Mark. “We are forever grateful to everyone, especially Dr. Sanderson not only for his ability but his compassion.”

“Lifesaving care is definitely a team effort. The emergency medicine team did a great job assessing the urgency of Nate’s situation and alerting the surgical team and me. They determined Nate needed to stay at Danbury Hospital because he was in such critical condition and time to treat was the difference between life and death,” said Dr. Sanderson. “Danbury Hospital trauma teams adeptly care for patients like Nate, even during a pandemic.”