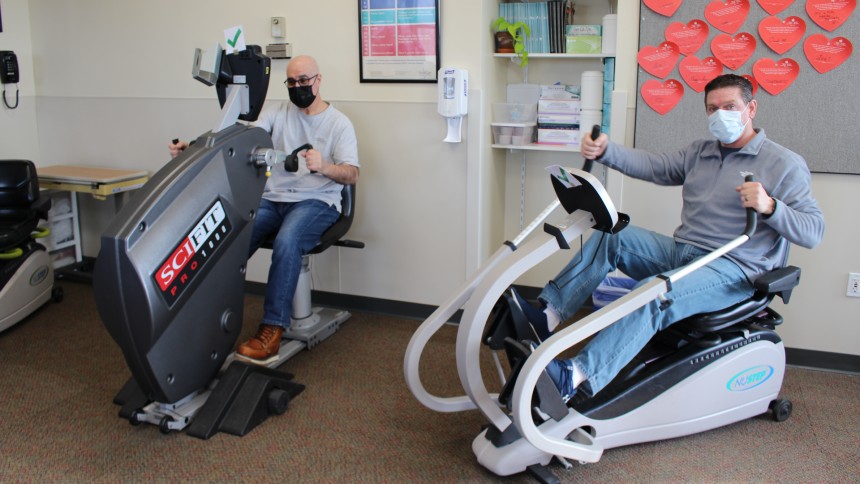 It’s been more than a month since Bryan Brooks and Ignacio Gomez completed their cardiac rehabilitation sessions at Putnam Hospital, but they continue to text each other about meeting up at their local gym and staying fit.

The two men met and formed a bond during the three months they participated in the program, fueled by encouragement and some friendly competition. “When I first started, I didn’t want to be here. I was stressed,” said Gomez, 63, a retired mechanical engineer from Brewster. “But then I would see Bryan on the treadmill walking faster than me, and I thought I have to do what he does.”


“He was always following in my footsteps,” joked Brooks, 51, a Bronx police officer from Brewster. “We put a fire underneath each other.”

The fast friends landed in cardiac rehab after Gomez had double bypass surgery in June and Brooks had a single bypass in May. Coronary bypass surgery is done to improve blood flow to the heart. A surgeon uses blood vessels taken from another area of the patient’s body to bypass damaged arteries.

Cardiac rehabilitation is a vital part of a patient’s healing process. A team of cardiac rehabilitation specialists works with each patient to develop an individualized program tailored to his or her needs, assisting them in medically supervised exercises safely and slowly to improve strength and energy.

“Cardiac rehab helps a person recover both physically and psychologically from a cardiac event,” said hospital Cardiac Rehabilitation Coordinator, Catherine Ahern. “It lets them know that they are not alone in this journey and that we are here to support them.”

“This program is awesome. We both didn’t want it to end. There’s a sense of security,” Brooks said. “But we’re on our own now. You have to make the commitment to yourself.”

This story is two patients’ experiences, recounted here for educational and general informational purposes only.