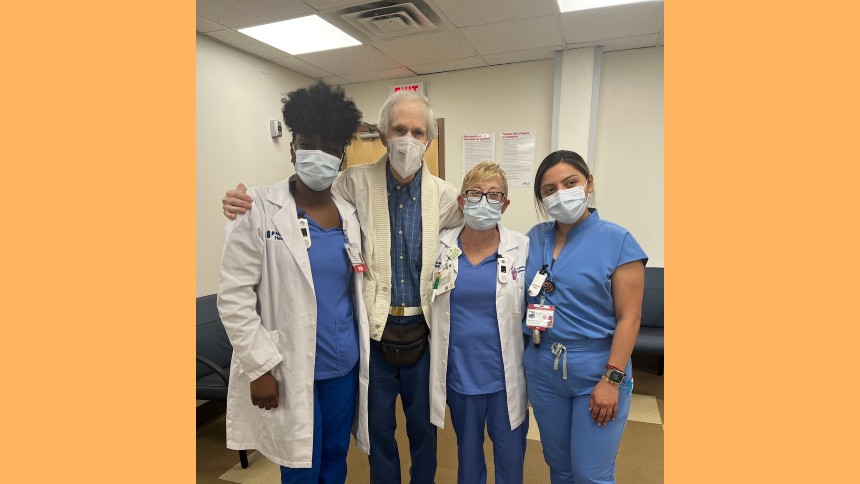 Joe Prisco called what happened to him at Putnam Hospital “divine intervention.” On April 5, after leaving a radiology appointment, Prisco collapsed in the parking lot of the hospital and went into cardiac arrest.

It just so happened that a nurse was walking behind them, his wife, Pamela Prisco explained, and she caught his fall and immediately began to work on him. Within seconds, members of the Putnam Hospital Emergency Department responded and worked to revive him.

“I have extreme gratitude and admiration for their professionalism and heroic deeds,” Joe Prisco,78, said of the ED team. “They are responsible for my renaissance, my rebirth.”

The Somers couple recently returned to Putnam Hospital to thank the team and to begin the process of starting cardiac rehabilitation at the facility.

“This is a credit to Putnam Hospital’s A rating,” Pamela Prisco said of the hospital’s Leapfrog patient safety award. “They could not have done anything better. They did not give up on him.”

Following his cardiac event, Prisco was transferred to Danbury Hospital where it was discovered he had 100 percent blockage of his right coronary artery, he said. Interventional Cardiologist Dr. Hal Wasserman, who Prisco had coincidentally heard of years ago and kept his name in his wallet, placed a stent in his blocked artery.

“I’m fascinated by how the events unfolded and want to add that the compassion and thoughtfulness everyone showed my wife is also an important part of this,” Prisco said. “I’m walking, talking with very little deficits. Out of great humility and gratitude, I want to say I love you all.”

Learn more about heart and vascular care at Nuvance Health.