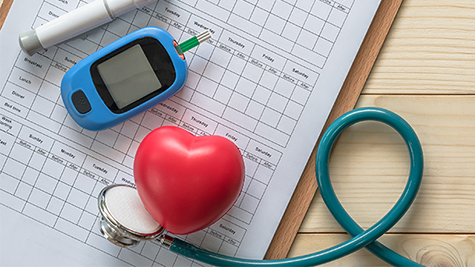 It’s ironic that a month culminating in the carb-heavy gluttony of Thanksgiving is National Diabetes Month, but maybe that’s appropriate for America in 2020.


The diabetes burden in America is enormous and somewhat astounding. About 1 in 10 Americans have diabetes and almost 100 million people have prediabetes.


We all know diabetes is bad.


People with diabetes have more kidney disease, more cancer and are more likely to die of COVID-19 than people who don’t have diabetes.


But the biggest killer of folks who have diabetes is heart disease. A huge part of what I do as a cardiologist is treat the cardiovascular complications of diabetes.


Now, I would make the argument that most diabetes is treatable and perhaps even reversible with the right lifestyle modifications (and there are companies out there trying to do exactly that at scale), but the vast majority of people with diabetes will end up on medications.


A big part of the reason for this is official dietary recommendations for people with diabetes are somewhat misguided. But getting the medical therapy right matters a lot as well.


The paradigm of diabetic treatment has changed markedly over the past few years, and if you are being treated by a doctor who isn’t aware of this, you need to be informed so you can get the right treatments.


When I was in medical school, the teaching about therapy for diabetes was we couldn’t reduce things such as heart attack and stroke with the right treatments, but we could reduce the risk of vision loss and kidney disease (doctors call this the difference between macrovascular outcomes and microvascular outcomes).


In other words, lowering blood sugar is good, but until recently there was no evidence medicines to lower your blood sugar protected against heart disease.


In fact, there are signals with some diabetes medications that cardiac outcomes are worse compared to placebo. Januvia (sitagliptin) and Avandia (rosiglitazone) are probably the two best examples here. And I still see patients who are on these medications all the time, despite the signal for harm.


Steve Nissen, the famous cardiologist from the Cleveland Clinic, is incredibly outspoken about the problems with taking a glucocentric approach to diabetes treatment.


He’s right. And luckily, the time has come when we can all do this better.

The new frontier of diabetes care

There are two new classes of medications that improve cardiac outcomes in patients with diabetes:

These medications are the new standard for diabetes care and the evidence keeps on mounting.


These medications don’t just protect your heart, they also reduce your blood sugar.


SGLT-2 inhibitors are protective against development of congestive heart failure (CHF) in people with diabetes. They’re even actually useful in patients without diabetes who have heart failure and are now part of the standard of care for CHF.


Quite a few of these have shown to have a positive impact: empagliflozin, dapagliflozin and sotagliflozin are the big ones. Canagliflozin, too, but this one has some concern with a signal for rare harms, like possibility of more amputations.


Semaglutide and liraglutide both have benefit in these areas.

Why do these medications work when other ones failed?

This is a great question. While we don’t have the full answers, we do have some ideas about the physiologic reasons why.


It has to do with the biological mechanisms behind how these drugs work and what makes diabetes so harmful. A lot of this starts with insulin.


We’ve known about the insulin and heart disease connection for some time. Higher levels of insulin accelerate cardiovascular disease.


GLP-1 analogues seem to have a slightly different and more complex mechanism of action. They seem to work partly mediated by slower stomach emptying, partly by inhibiting a hormone called glucagon and partly by causing weight loss. The proof of better cardiac outcomes is clear at this point.

If you have diabetes, know someone with it or treat people with it, these are vital treatments to be aware of because they are now the standard of care.


In the time of a pandemic, when metabolic disease, obesity and diabetes are the elephant in the room for bad COVID-19 outcomes, as well as increased risk of cardiovascular disease, updating our treatment strategies for these millions of patients is a vital step forward.