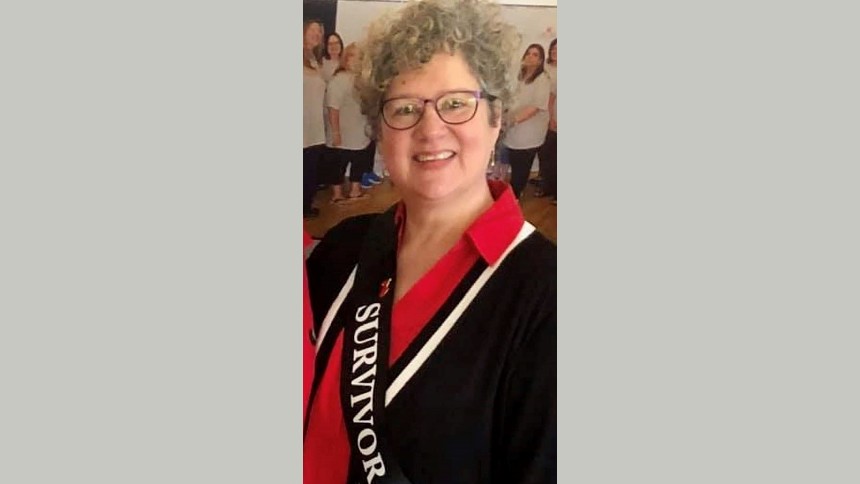 Five years ago, Tina Vaitkus had a heart attack. At the time, it was a nightmare. But if you ask her to describe it today, she will tell you it was a wonderfully eye-opening experience.

“I was home getting ready to go for a run when I had the classic Hollywood-style heart attack — pressure in my chest, difficulty breathing, numbing down my arm,” Vaitkus, of Poughkeepsie, New York said. “Many women aren’t that lucky, as it can be a heartburn feeling or unexplained jaw pain, so they doubt their symptoms.”

Vaitkus was 49 when she had her heart attack, the same age as her father when he had his. Because she experienced the classic symptoms, she quickly called 911 and an ambulance took her to Vassar Brothers Medical Center (VBMC). Her son was home at the time, and her only plea to the medics was, “Please don’t let me die in front of my 14-year-old son.”

Vaitkus did indeed survive, and she thanks her attending physician, Dr. Lawrence Solomon, a cardiologist with The Heart Center, for saving her life. The Heart Center, a division of Hudson Valley Cardiovascular Practice, P.C., is part of Nuvance Health.

When she arrived at VBMC, Vaitkus’ EKG was normal, and her blood pressure was only slightly elevated. Still, Dr. Solomon ordered a cardiac catheter that revealed three blocked arteries. Vaitkus required three stents that she calls her “titanium heart bling.”

“I’m so incredibly thankful that Dr. Solomon truly listened to my symptoms,” Vaitkus, now 53, recalled. “He knew he needed to check. You can be as healthy as possible, but still have a genetic predisposition.”

The irony of Vaitkus’ heart attack is she had been in the best shape of her life, having recently graduated from Better U; a 12-week American Heart Association program that helps participants lead a heart-healthy lifestyle with a gym membership and educational seminars on nutrition, sleep and stress. She documented her health journey as the host of “The Tina Show” on Pawling Public Radio.

“I lost 53 pounds. I earned exceptional cholesterol and blood pressure numbers,” she said. “I was in great shape, and my family and I are now living a healthy lifestyle.”

She also credits her Better U experience for saving her life.

“Had I not been in good health as a result of the program like I was, I think the heart attack would have killed me,” she said.

Today, Vaitkus continues to lead a healthy lifestyle, checks in with her cardiologist in Poughkeepsie every six months and proudly spreads her motto.

This story is one patient’s experience, recounted here for educational and general informational purposes only.