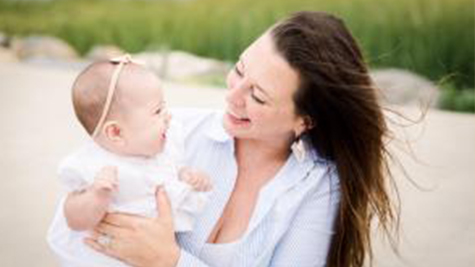 DANBURY, Connecticut, September 18, 2019 — Josh and Steffani Weinshank of Ridgefield, Connecticut toured the Danbury Hospital Family Birth Center to prepare for the birth of their first daughter. During the tour, they learned about the Doula Support Program. Although Josh and Steffani were not familiar with what a doula does at the time of their hospital tour, they thought it couldn’t hurt to have additional support during Steffani’s labor and delivery. Having a doula turned out to be the most positive experience for the couple. So much so that their doula was one of the first phone calls they made about a year later when they found out they were expecting their second baby.

What Is A Doula?

Danbury Hospital was one of the first hospitals in the country to establish a doula program. Through Danbury Hospital’s Doula Support Program, women can choose to have a doula during their stay at the Family Birth Center. Doulas are part of the multidisciplinary Family Birth Center care team. They are professionally trained to provide physical, emotional, and informational support and encouragement to women and families before, during, and shortly after childbirth.


Danbury Hospital doulas are on call 24/7, ready to help women and families no matter what time of day or night. They stay by a woman’s side during her entire birthing experience, helping her use relaxation techniques to manage discomfort and making sure she has everything she needs.

Steffani was in labor for 36 hours with her first baby, and Angel Fredricks, a doula at Danbury Hospital, was there the entire time.


“It’s so wonderful to have the one-on-one undivided attention that the doula provides during the labor process. They have first-hand familiarity with the hospital and know the doctors, nurses, and staff so well,” said Steffani.


“Angel was by Steff’s side the entire time. Every time she needed something, Angel was there,” said Josh.


In addition to providing dedicated, one-on-one emotional and physical support during childbirth, doulas help women and families understand what is normal and what to expect, as well as advocate for their needs.

“It was so hard to know exactly what we would encounter and what we would experience in the birthing process. All we knew was that we wanted a happy, healthy baby. Angel helped set our expectations and guide us, which kept us grounded during the entire labor and delivery,” said Josh.


Doulas also apply their knowledge of the birthing process and serve as a liaison between mothers and families and medical staff.


“As a woman going into the birthing process, especially for first time, you don’t really know what to expect and how to advocate for yourself because there are so many unknowns,” said Steffani. “Angel not only stepped in to advocate for me but she helped streamline communication between our care team and us.”


Steffani continued, “It was clear that Angel had a great relationship with the medical staff, which made things so much easier from a communications perspective.”


“We’re part of the hospital team,” said Angel. “They know us, and we know them. It’s a well-oiled machine, and the staff really enjoys us being with them.”


Doulas take a therapeutic approach to childbirth. Angel used techniques including aromatherapy, back massage, and music to help create a relaxing atmosphere and relieve Steffani’s discomfort.


When baby Winter arrived on August 25, 2017, Angel went above and beyond to help the new family of three create a lasting memory.


“After Winter was born, we weren’t thinking about capturing photos of the moment because we were so focused on this beautiful new baby. But Angel was. She took pictures with our camera of Winter and our family after the birth so we could just be together in that moment. That was so special — what an impact and a memory we will have documented forever,” said Steffani.


Later, Angel gave Josh and Steffani a keepsake book filled with pictures of Winter’s birth, as well as receiving blankets and a tie-dye onesie. The Weinshanks stayed in touch with Angel. She was among the first people the couple told when they became pregnant for the second time.


Even though the Weinshanks had a better idea of what to expect during the birth of their second baby, the couple was still excited to include Angel in their upcoming birthing experience.

Steffani began having contractions at 34 weeks when she was pregnant with her second daughter. She ended up delivering baby Waverly early, at 36 weeks on March 4, 2019.


When Steffani went into labor at 11:00 PM during a winter storm with over 10 inches of snow on the ground, Angel was there again.


“I didn’t expect Angel to come, but she came — in a snowstorm — to be with us,” said Steffani.


This time, Steffani was only in active labor for six minutes.


“The second birthing experience was moving quickly and so different from the birth of our first daughter. We were thankful to again have the expertise and help from Angel,” said Steffani. “Because Angel is incredibly familiar with many different birthing scenarios, she knew what to do and that took the pressure, worry, and concern off of us.”


“After spending time with the Weinshank’s during the first birth, we really got to know each other,” said Angel. “For the second birth, it was like being a part of their family.”

Josh and Steffani both agree that having a doula during childbirth was an asset.


“The doula program is invaluable, and Danbury Hospital makes it so accessible to everyone,” said Josh. “It’s hard to believe that doula programs have not been implemented in more hospitals as a high standard of care and an option for all women during childbirth. I couldn’t imagine having a baby without a doula’s steadfast support and expertise.”

“Angel really and truly cared. She was so happy to be there the entire time, despite the time of day (or night!) or weather conditions,” said Steffani.


Angel has been a birth doula for 15 years and a postpartum doula for 25 years. For Angel, being a doula is more than her job — it’s her passion.


“As a mom myself I know that the birth experience is something women and families remember forever,” said Angel. “So I want women and families to have what they perceive to be a perfect birth. I want them to leave the hospital saying, ‘that was amazing!’”


Angel takes her job very seriously. She has a Suburban to make sure she can get to the hospital even in the most inclement weather, which is how she got to the hospital for Waverly’s birth. She makes herself available 24/7, whether for actual births or troubleshooting over the phone with other doulas that are in a birth.

Women can choose to have a doula during their stay at the Danbury Hospital Family Birth Center. Doulas are professionally trained to provide support and encouragement to women and families during the birthing experience. For more information about the Doula Support Program, call (203) 739-6932. Also, visit our website to learn more about pregnancy, childbirth, and postpartum care at Danbury Hospital.