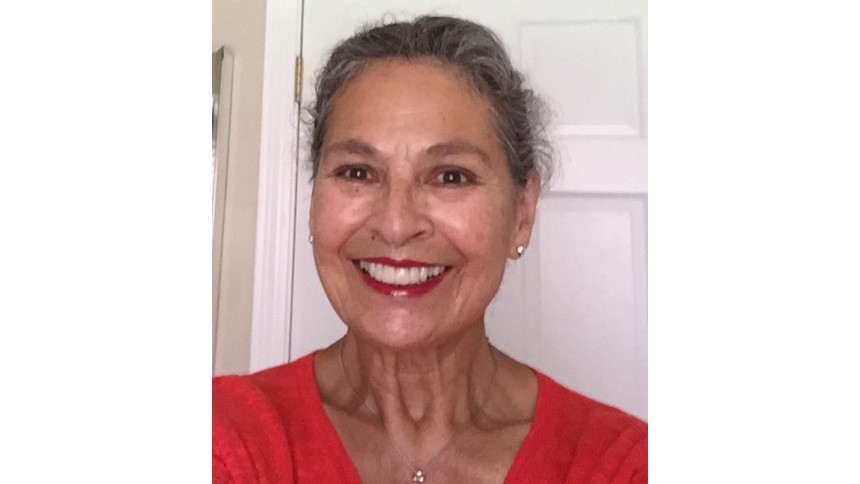 A Connecticut couple both had brain surgery to treat cancer

After 49 years of marriage, Jayne Davis said, “My husband Frank and I are like mac and cheese. Not the same, but similar.”

This oddly rang true when Jayne, who is 70-years old, learned she had lung cancer that had spread to her brain. Jayne knew just the neurosurgeon she wanted on her care team because he had surgically treated Frank’s glioblastoma, an aggressive and deadly type of brain cancer.


“I was swept off my feet to learn I had cancer and it was serious.”

Jayne thought something was wrong with her vision. She visited her eye doctor thinking she needed a new eyeglass prescription, but her eyesight appeared to be fine. She decided to follow up with her internist Dr. David McIntosh at Nuvance Health Medical Practices Primary Care New Milford.

“I was mainly concerned about my eyesight, but Dr. McIntosh noticed other symptoms. He asked me questions and to draw a clock. They were the easiest questions, but I realized I was not answering them correctly,” said Jayne. “I also could not draw some of the numbers on the clock or even draw a circle. Dr. McIntosh also thought I was slurring my speech.”

Dr. McIntosh recommended Jayne have a CT scan of her head, which she was able to do right away at New Milford Hospital Diagnostic Imaging and Radiology.

The CT scan revealed Jayne had tumors in her brain.

After hearing the startling news, Jayne said, “I did not comprehend what was happening yet. I just knew that my son Kevin was coming to pick me up at my house and take me back to New Milford Hospital.”

New Milford Hospital admitted Jayne as an inpatient. Additional tests revealed she had four tumors in her chest. Jayne had stage 4 lung cancer that had metastasized to her brain.

“I was swept off my feet to learn I had cancer and it was serious,” said Jayne. “It was a huge shock, partly because Frank had a glioblastoma about 18-months earlier. Now, we both had pickled heads.”

Jayne continued, “I had been taking care of Frank for a long time; it was odd that now I needed help.”


“When it came to my turn, I had no doubt that I wanted Dr. Lebovitz to perform my surgery.”

Jayne had four different tumors in her brain. The largest one was in the left occipital lobe, which explained why she was having vision problems. Dr. Lebovitz recommended surgery to remove it, which was the first line of treatment for Jayne’s cancer. 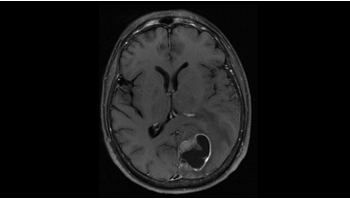 Jayne confronted having brain surgery with courage and said, “I knew it was what I needed to do to get over the first hurdle.”

“We have biweekly meetings with medical and radiation oncology, radiology, pathology and more specialists to ensure each patient gets a team approach to their treatment,” said Dr. Lebovitz. 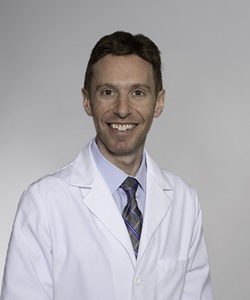 Jayne underwent a craniotomy, a serious type of brain surgery, at Danbury Hospital.

During the three-hour surgery, Dr. Lebovitz temporarily removed a bone from Jayne’s skull to access her brain. He then successfully removed the largest tumor from her brain.

Jayne recovered in the dedicated neuro unit and said, “I had fantastic nurses and thought everything was magical. The air was clean and my room was nice,” said Jayne.

Jayne said she “felt well” when she came home from the hospital until 10 days later when she needed a second surgery to treat a cerebrospinal fluid leak, which can occur after a craniotomy.

Jayne had moved from Woodbury to New Canaan, Connecticut at that time so Dr. Lebovitz recommended she have surgery at Norwalk Hospital because it was closer to her new home.

“I felt more worried before the second surgery, but I knew it was another hurdle I needed to jump,” said Jayne. “I had a great team around me, which eliminated most of my anxiety. I decided to go with the flow.”

Jayne recovered in the hospital for about a week. She said she had “fantastic nurses at Norwalk Hospital” and Dr. Lebovitz checked on her often.

“I live with optimism; I am not ready to throw in the towel.”

Jayne has continued to persevere through the brain surgeries and cancer treatment.

She has had four rounds of six hours of chemotherapy delivered intravenously over three days, and 10 rounds of radiation therapy to treat the cancer.

Jayne will have intravenous immunotherapy once every three weeks for the rest of her life.

“I have to jump the hurdles,” said Jayne. “There might be a time in my life where I say ‘no thank you’, but now is not that time.”

Jayne continued, “I am willing to go through all the treatments if it buys me time. I am looking at years. I have three grandchildren, 12, 10 and 8, that I want to see graduate from high school. That is my intention,” said Jayne. 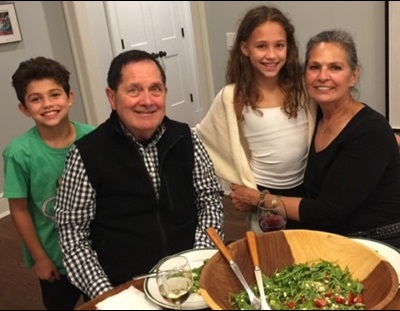 Frank and Jayne Davis with grandchildren Ryan and Olivia

Jayne, who is originally from India, and Frank, who is from the United States, met in Milan, Italy and they have traveled the world together ever since. She intends to continue traveling.

“We have traveled a lot but I want to see places I have not seen and revisit places we love, like Florence and South Africa to go on a safari,” said Jayne.

“I live with optimism; I am not ready to throw in the towel,” said Jayne. 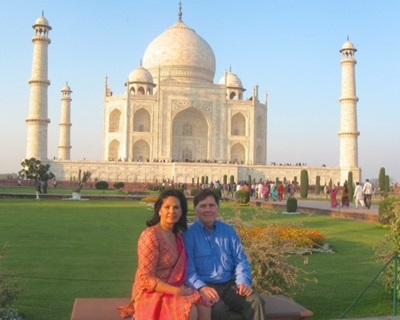 Frank and Jayne Davis at the Taj Mahal in India 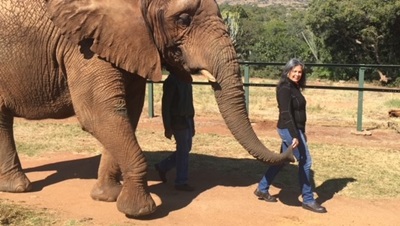 Jayne Davis on an African Safari

“I am in a good place because I get to keep living.”

Jayne is adjusting to managing her disease and side effects from treatments, which was difficult because she likes to keep busy and is used to being active. She played squash, practiced Pilates, and has done speed-walking marathons to raise money for leukemia.

“When I feel tired, when I do not feel hot to trot, I give myself permission to take time out and I let someone else worry about walking the dogs,” said Jayne who has two English Springers Zedra and Wallace. 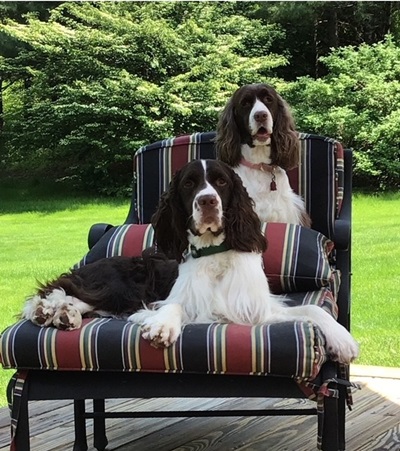 Jayne adores her dogs Wallace (front) and Zedra (back)

She has lost some vision in both eyes, and she has no peripheral vision on her right side, which means she cannot drive.

“That ticked me off because I like my independence,” said Jayne. “Also, I had recently bought a new car that my son has driven more than me.”

She has thankfully been able to get back to cooking, gardening and painting.

Art, music and nature are therapeutic for Jayne. She paints with watercolors, which she could not do after her first surgery.

“After the second surgery, I was inspired when I could pick up a paintbrush and paint again,” said Jayne. 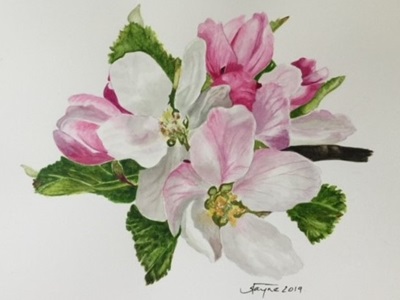 Frank is persevering too, despite having a terminal disease.

The average length of survival for people with glioblastoma is about 12 to 18 months.

Dr. Lebovitz removed Frank’s glioblastoma about two years ago, and he had chemotherapy and radiation therapy, too.

“Glioblastoma is the most aggressive type of primary brain tumor. Despite that, Frank is doing well. I am very proud of him,” said Dr. Lebovitz.

On tough days because of Frank’s condition, Jayne would pack a picnic, drive to a beautiful area and park to have lunch.

“It was really healing,” said Jayne. 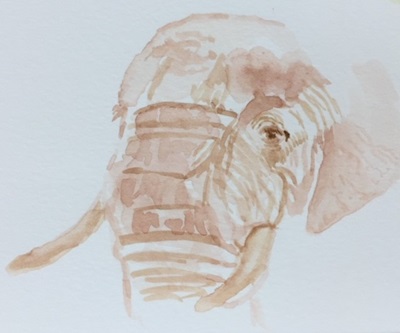 Now, her sons Kevin and Keith drive their parents, Zedra, and Wallace to a scenic area for lunch.

“To anyone else out there dealing serious medical conditions, consider changing your scenery, listening to music and seeing art, colors and people. That has helped us transcend from where we are and take us to a different place, even just momentarily,” said Jayne.

Jayne is grateful for every day, Keith and Kevin who she said, “take care of everything,” and her care team. 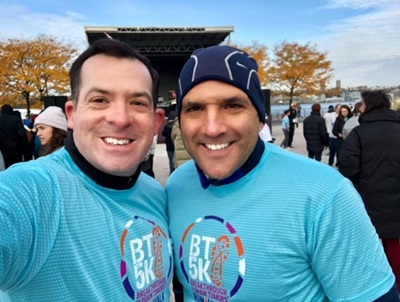 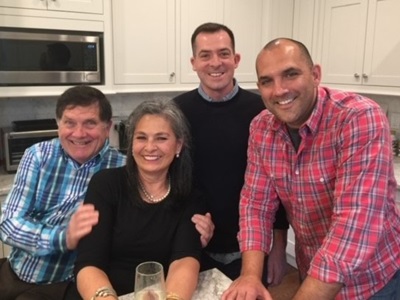 “I am where I am because I have a great team, from my family to Dr. McIntosh, hospital, nursing and operating room staff, Dr. Lebovitz, neurosurgical physician assistant Gina Porto and whoever else was there whom I did not formally meet,” said Jayne. “I have such gratitude towards everyone and will not forget how they have assisted me.”

Jayne continued, “I am in a good place because I get to keep living.”

The outcome of treatment for brain tumors and cancer varies from person to person. No individual results should be seen as typical.