We invite you to honor Dr. Shahid’s commitment to the field of Neurosurgery.

To recognize Dr. Shahid’s four-decade career as a neurosurgeon an endowment fund has been established in his honor. The S. Javed Shahid, MD Endowed Fund for the Advancement of Neurosurgery will support clinical education and enhanced technology across the Nuvance Health system. Please consider making a gift in honor of Dr. Shahid, using the donation form below. 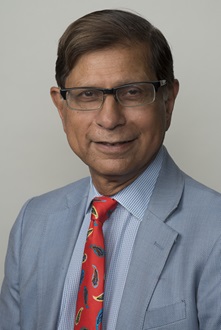 S. Javed Shahid grew up in Karachi, Pakistan. Active in sports, he was a Gold Medalist in high school and captain of the cricket team. He was also an avid member of the debate club. At eleven years old, he already knew he wanted to become a doctor, and his determination never faltered. Working towards this goal, Dr. Shahid first graduated from the Government College in Hyderabad, Pakistan with Honors, where he was also involved in athletics and various state competitions. He then attended Dow Medical College University in Karachi, Pakistan. During the 1972 war, he was in his third year of medical school and assisted with surgeries in the neurosurgery unit. This experience lead him to choose neurosurgery as his field. He graduated at the top of his class with Honors and the Gold Medal award.

In 1997, Dr. Shahid established Neurosurgical Associates of Southwestern Connecticut, and expanded it from two to five neurosurgeons. That same year he became Chief of Neurosurgery at Danbury Hospital, an honor he held until his retirement in 2020. He maintains emeritus status for his continued devotion to his practice.

Throughout his career, Dr. Shahid was involved in teaching and encouraging careers in neurosurgery. His passion for medical education led to his engagement with the Global Health Program at Danbury Hospital. He went to China, offering consultations to private patients and neurosurgeons. He also lectured extensively on neurosurgery in Pakistan. In 2017, he traveled to Kazan, Russia for a similar pursuit. His work in global health included hosting neurologists and neurosurgeons from Russia in Danbury so they could spend time in the Operating Room and at Dr. Shahid’s office – allowing the visiting scholars to fully understand and help advance the practice of neurosurgery in Russia. For his international medical educational work, he was honored with the Linde Excellence in Mentoring award at Nuvance Health’s Global Health Conference in 2019.

The creation of S. Javed Shahid, MD Endowed Fund for the Advancement of Neurosurgery will honor his commitment to the field of Neurosurgery. Funding will support clinical education and enhanced technology.