Want to be a nurse? Here's how they did it 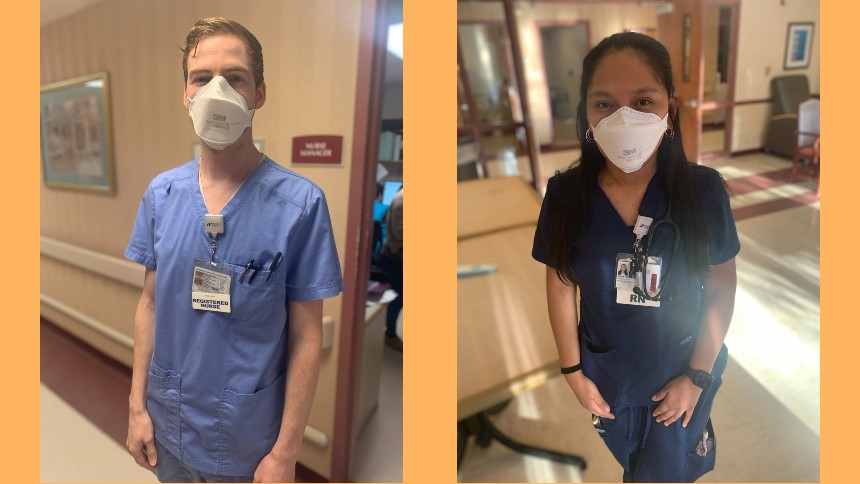 Want to become a nurse? There are many career paths into the field after college.

We caught up with two recent nursing graduates to learn about how they became registered nurses at Nuvance Health — during the pandemic no less!

Justin Harris of Kingston, NY, is a nurse supervisor at the Thompson House skilled nursing facility on the campus of Northern Dutchess Hospital. Even though he holds a supervisory title, Harris just completed his associate’s degree in nursing in 2019.

Nuvance Health is hiring recent nurse graduates at some of its affiliates, including the Thompson House.

Harris plans to use the experience he’s gained for career development. That experience includes not only geriatric nursing, but because the Thompson House has a short-term rehabilitation unit, he’s getting medical and surgical nursing experience, too.

A registered nurse wasn’t his first career choice. After high school, the Town of Newburgh native studied engineering at SUNY Orange, but he didn’t feel mature enough to decide then and there how he’d spend the rest of his adult life.

Taking a break from college, he traveled to South America, became a certified yoga teacher and waited tables. After he and his wife had their first child, Harris knew he had a passion for physiology.


“I never had the nursing destiny,” he said. “I considered it because I thought nursing was a good place to start.”

Now enrolled in his bachelor’s program online, he added: “I’m setting the groundwork for what I want to do next.”

Diana Vazquez discovered her destiny to become a registered nurse as a child when she had surgery to fix her cleft palate. The nurses who cared for her were “unforgettably kind,” she recalled.

But she didn’t pursue nursing right after high school. Instead, she received her bachelor’s degree in Italian language arts. After graduation, she thought, “What do I do with that?” she said.


While working at the Gramercy restaurant Posto, she enrolled in the nursing program at Long Island University in Brooklyn. In 2020, with her bachelor’s degree in hand, COVID-19 was surging in her neighborhood in Elmhurst, Queens. Diana and her family wanted to get out. They found a new start in Milton, Ulster County.


“I love the quietness and how nice everyone is,” she said about living among fruit orchards overlooking the Hudson River. She just needed a job.

A quick online hunt led her to a Nuvance Health talent recruiter, who mentioned the opening at the Thompson House. In March 2021, it was official. Vazquez landed her first RN job.


“The patients — they’re so funny,” she said. “I really like working with this population. They have jokes and they don’t hold back; they say what they have to say.”

What’s next for her career? She wants to be a cardiac unit nurse, but for now, “The things that I’ve learned in school are really clicking.”

To apply for a position at Nuvance Health, visit our careers page.